Following a long career in the Israel Defense Forces and other public offices, Dr. Zvi Shtauber is currently  his 2nd term
as the  Board Chairman of the Israel Intelligence Heritage and Commemoration Center (IICC) replacing  Mr. Efraim Halevy a former head of the Mossad. He completed a twenty-five year career in the IDF, mostly in various intelligence assignments and retired with the rank of Brigadier General. His final position in the military was head of the IDF Strategic Planning Division. Prior to that, he served as the assistant defense attaché in the Israeli embassy in Washington. Upon his retirement from the IDF, Dr. Shtauber served as Vice President of Ben-Gurion University of the Negev and in July 1999 he became the foreign policy advisor to Prime Minister Barak. In this capacity he was the Co Chairman of the American- Israeli strategic partnership.

In 2001 he was appointed Israeli ambassador to the UK, a position he held until mid-2004. He also served as the Director of the Jaffe Center for strategic studiesin Tel Aviv University and was the founder and director of the Institute for National Security Studies (INSS), Tel Aviv. Dr. Shtaube was  a member of the Israeli delegations to the peace talks between Israel and its neighbors, including the talks with Syria at Shepherdstown ,with the Palestinians at Camp David and the Jordanians. He also represented the IDF and Israel in multi-lateral negotiations on regional security. Dr. Shtauber completed the advanced management program at the Harvard Business School and holds a Ph.D. from the Fletcher School of Law and Diplomacy.
חזרה 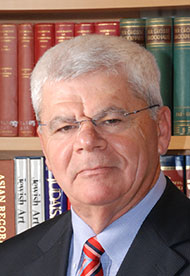